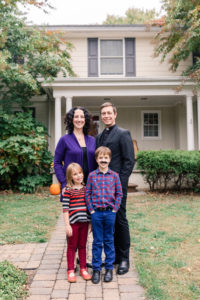 Originally from Detroit, MI, Pastor Christopher Porter is the called pastor of Lebanon Lutheran Church in Lebanon Church, VA. He received his B.A. in Psychology from William Tyndale College in 2003, and an M.Div. in 2014 from Lutheran Theological Southern Seminary/Lenoir Rhyne University. In 2012 he received additional education in catechetical instruction from SS. Cyril and Methodius Seminary in Detroit, Michigan. Prior to receiving his M. Div., he served as a lay preacher for Lutheran CORE congregations in North Carolina, and later served as a lay Bible teacher and Deacon intern at Historic Trinity Lutheran in Detroit (LCMS).
​
He is blessed with a wonderful wife, Colleen, and two children: Ben and Rachel. He loves philosophy, foraging for mushrooms, the arts, literature, kayaking, and cooking (especially Southern cooking!), but he thinks the greatest thing in the world is to be able to preach, teach, and administer the Holy Sacraments to God’s people. He would love to talk with you about the great things God has done for all humanity in Christ, Jesus, the Lord and Savior of the world.

We preach and teach the pure Gospel of Jesus Christ as it is given in the Holy Scriptures.